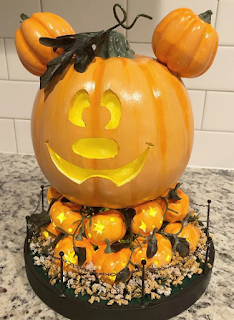 Last year, Disney Family did a post about making your own Mainstreet Halloween display like the one in Disneyland. I've been wanting to do it since watching the video, and when the 2020 Halloween decor showed up in stores, I had my shot. The original post is accessible through the link below:

I bought a medium craft pumpkin that I carved to be like the main portion of Mickey's head, then glued down the ears. I had a bag full of small white styrofoam pumpkins that I then cut open, hollowed out, and carved the stars into. Each pumpkin was then painted the same color orange with shadows of darker orange and watered-down yellow in the carvings.

A wooden circle base was covered in sticky-back green felt to mimic the grass. On this, I arranged and glued down the pumpkins, all while installing the string lights and hot glueing them into the smaller pumpkins. The back of the largest pumpkin has an opening in the back, through which I glued some yellow satin (light could shine through, but you couldn't look in and see a battery pack).

Then, I started to dismantle yellow and white faux-flowers. These smaller blooms did well to be miniature versions of larger flowers in a bed surrounding the display. The greenery that was left was used to make the vines and leaves; larger leaves were also pressed in-between the smaller pumpkins to keep light from spilling out.

Around the base, I did a strip of black 1/4" foam. Into this, I pressed black-painted toothpicks. I strung a black-metallic jewelry chain between the posts and glued a black bead on top to seal the chain in place.

Finally, the whole piece (minus the foam, felt, and flowers) were coated in a semigloss layer of modpodge to protect the paint and help hold everything together.

It follows many of the same beats as the original posted video, but I like to think I suped mine up a bit with the lighting. 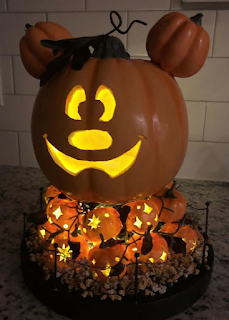 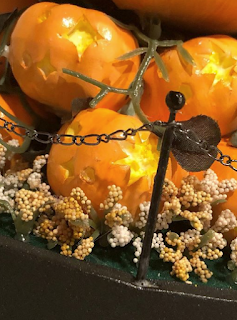 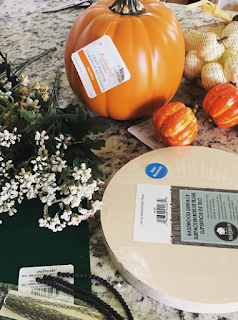 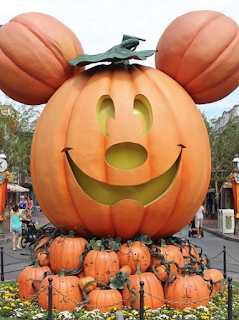