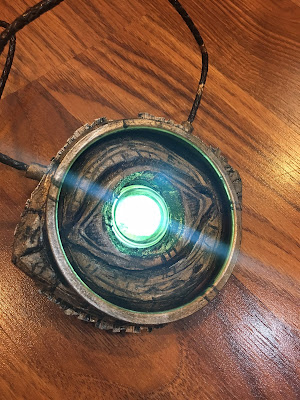 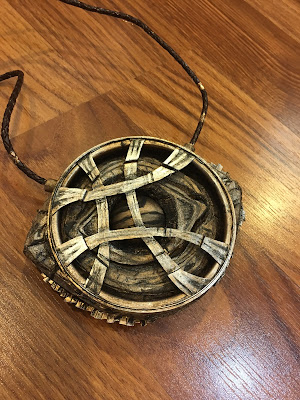 So, Doctor Strange comes out tomorrow! How did that sneak up on me so quickly?!? Anyways, I really like how unique the comic character is. I find people like him, Thor, and Scarlet Witch so intriguing because they can't really be explained, it's just MAGIC and you have to deal with it. Not over-scienced to fit into your explanation of the real world, just powered people.

Anyways, to continue my collection of my MCU infinity gems, I decided to make the Eye of Agamotto as a one-day-build. Luckily, as a constant crafter, I didn't have to buy much for it. Used a 50% off coupon at Michaels for the braided leather necklace and they were already having a sale on their jewelry beads, so I bought it in green. Even if the eye turns out not to be one of the infinity stones, it looks cool enough that it's just a fun movie prop to have.

First thing, I had to decide which version to make... through research, I discovered that when the eye is closed, there is gold over the gem and a silver-y cage on top in the shape of the Seal of the Vishanti. When it is open, it glows green and the top cage is gone. I had an LED at home, so I thought I'd make it open, but the cage is such a signature shape for his character. I wanted to do a version that could be both, and I thought of a way to do it in bed when I couldn't sleep because I had a late night snack...a snack cup of mini Nilla Wafers... with a removable plastic lid... you see where I'm going with this, right? If I lifted the cup lid lip just high enough over the base, I could pop the lid-carved-cage on and off. And if I made the LED cutout a just right, it would be tight enough to hold it in place, but loose enough to swap out the glowing LED for a gold-painted closed eye.  It's a tad bigger than I was expecting, but I doubt I'll make the whole costume, it's just a shelf piece. Also, the lid has a slight ridge build in; I just used this as some of the lines that are carved into the seal, but it does look a bit strange in photos if they aren't taken straight at the Eye; it looks like a mistake cutting or just an odd angle.

So... 1: cut out the cup top with lip, 2: cut the lid into the seal of the Vishanti, 3: Cut some thicker craft foam into the eye shape around the cup and glue the cup inset into it (raised a tad so the lid can still attach), 4: add a cardstock base for foam strength, 5: create second cardstock base with the edge scalloping detail, glue it all together (I used black lines to line up where things should meet, like a sewing pattern), 5: carve shapes into foam, 6: base coat of gold spray paint on the eye and silver on the seal lid, 7: weather and emphasize carvings with black acrylic, 8: break up the green gem with a hammer, 9: insert broken gem into LED dome (I also put in a small piece of lime green wrapping Raffia to give it a more green tone since the light was white), 10: paint an extra LED gold and add the black line details, 11: add gold ends to leather string then attach to the back of the cardstock with hot glue (PS, all the glue I used was hot glue since it works so well with both foam and cardstock).

and done! Well, I need to do more research and see what kind of strings are wrapped around the leather cord (I can't really tell from pictures I've seen, so may wait for the movie). Anyways, check out some process pix below. 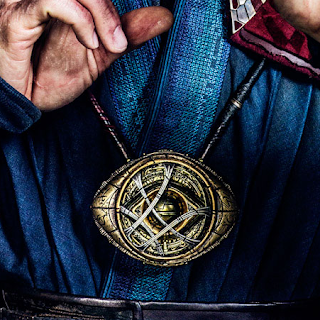 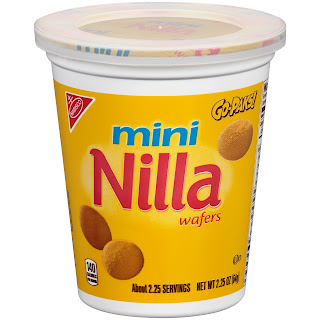 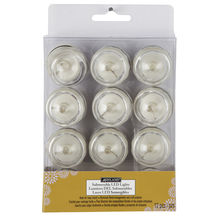 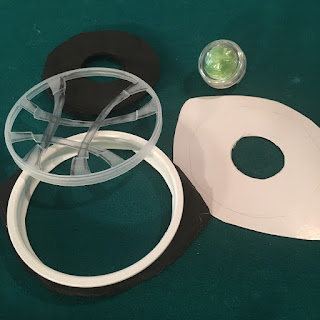 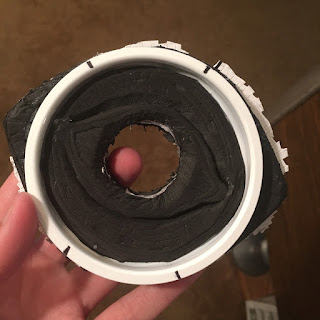 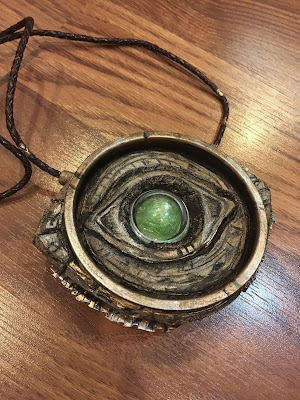