I go through major obsessive spurts with Netflix's Daredevil series. Usually right when a new season is released and half way in between when I rewatch them. I started on the idea for these about a week after season 2 came out... a couple days after I got done watching it (yes, I watched a season in less than a week). I loved the challenge of taking something pretty complex and making my own dumbed-down version. I had the idea to make it out of walking canes! They are fairly close to the same size (maybe smaller diameter), plus they already come with mechanics that have a button release to slide an internal bar around. With some help from my brother, I got the plan down and drew on the cane where it needed to be cut. My dad had a metal saw and some files that got it perfect. After that, I painted it all red; the special details come from the awesome contact paper I seem to be using for everything these days: carbon fiber and brushed stainless steel. By the end, this is actually 3 pieces; two releasable ends (one with cord and one without) and the center piece with holes for the two ends to click into. I stuck some defining stickers on the central piece...the free end has one ring and the cord end has 2; very subtle but enough for the person holding it to know which end is which.

Sure, it sounds like a quick process, but it took me basically a couple months to get off my ass and do all of the little things this piece required. I was waiting to find a retractable wire mech to fit inside the cane, but I could never find one long enough. I bought an ID badge, a tape measurer, and an electric wire holder, but no luck. I ended up buying some silver paracord, which I love the look of, but when I go to make the two pieces one longer staff, I have to feed the cord back into the pipe. A bit annoying, but the final look is worth it. Any smaller mech would've had a tiny wire, so I like how this one is pretty visible. 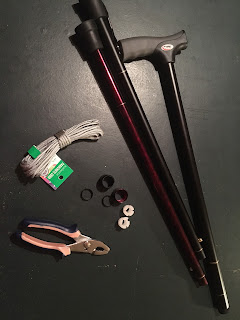 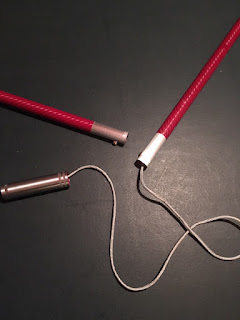 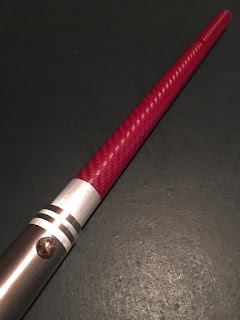