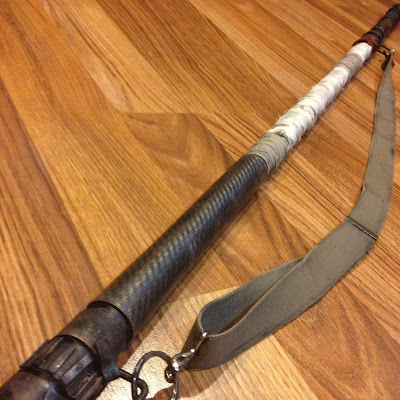 Yeah, it was roughly $10 out of pocket... $3 pvc pipe, $6 suspenders, $1 craft foam sheet. If you had to buy the paints, glues,buckles, and fabric,  it would still probably only be around $35-ish though. Lucky for me, I have all of that lying around my room at any given time. The carbon-fiber-textured sticker is a special piece that I added to give it a little extra dynamic, but can be done without that.

After seeing the Force Awakens the second time, I made my custom Rey 1/6 scale figure. Sure, the staff for her was made of a broken plastic hanger and some hot glue details painted black, but I saw that it could be pretty simple.

I was actually going to go to Lowe's and get the black-coated galvanized steel pipes, but they were so heavy and I knew that I didn't have the proper equipment to trim it to size without getting dad to find one of his metal saws. I found a $3 PVC pipe that nearly matched the size compared to the photo (using her grip to get a basic idea) and got the height from comparing it to my height. My guess is that Daisy Ridley, like most people, is taller than I am; so, I made it to go with my height instead of an exact measurement of the original prop. It's basically the height of my wrist if I held my arm up straight over my head. After it was trimmed and lightly sanded, I just started drawing out the relative location of certain shapes so I would know how big to make them; really helped because I probably would've gone too big and not had any room for the bottom half haha. After that, it's just basic construction with the craft foam and hot glue. Building up layers for thicker areas and what not... After that, I added the initial metal hardware loops that will hold the strap in place. I also saw one area that was basically ridged and carved into the metal near the fabric grip area; I mocked this basic idea by painting on some light stripes of puff paint. Be sure it is well sanded below there and to be delicate when aging afterwards as this paint tends to easily peel off. With that done, I did 2 base coats of black primer spray paint then a thick layer of black plastidip. It helps seal up any ugly areas and flatten out some rough patches; plus, it feels way better to the hands than just the black spray paint. After that, I added some weathering marks with silver spray paint that I brushed on edges and scrapes by spraying it on a plate and using a bristle brush. Then I dirtied it up with some rust-colored acrylic paint. After that, I added the carbon fiber stickers, which really took it up a notch. Then I hot glued on some strips of fabric and leather on the grip, which I weathered with black and brown watered-down acrylics and the bristle brush. Lastly, I took apart some green suspenders and attached them with larger key-rings; this was also weathered with water and black acrylic.

Looks pretty killer for that cheap, and the PVC keeps it incredibly lightweight! 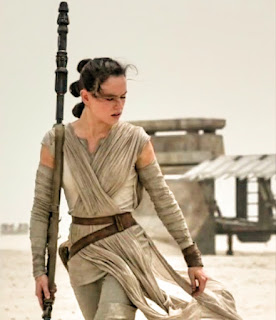 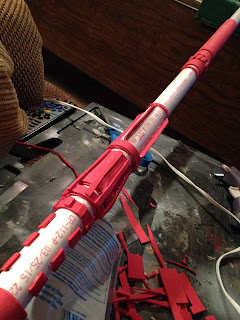 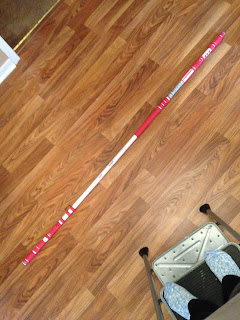 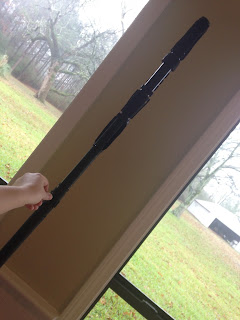 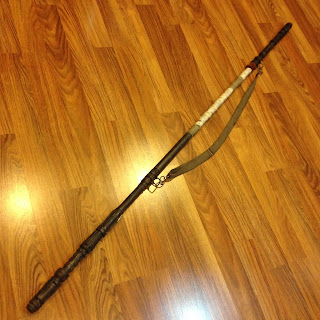 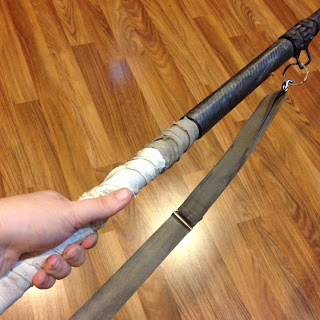 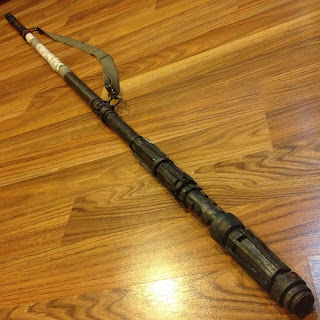 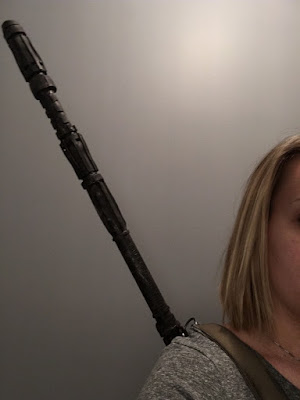