Yeah, so this costume is coming together too easily. Already saw the movie twice and before it had even been out a week. So far, with all of the things you see here, I have just had to buy some buckles and a styrofoam ball, plus some pants. I did find a reddish long trench on ebay for eight bucks, so when I get the whole look together, I will be sure to post a picture. 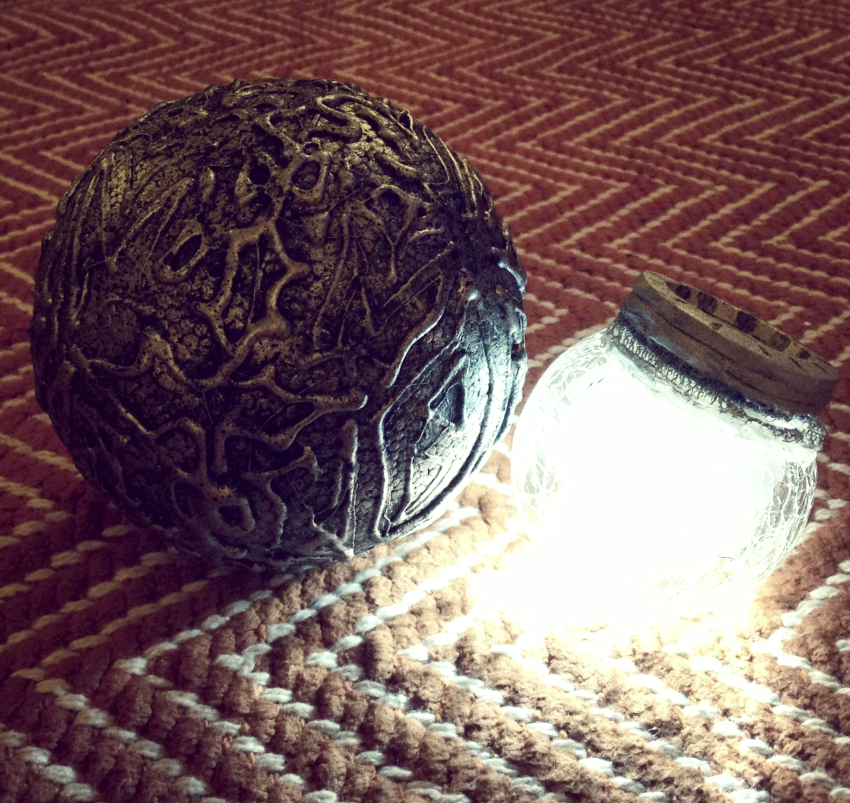 First, I did the orb that holds the infinity gem. Just a styrofoam ball from Michaels; I hand-did a symmetrical pattern with hot glue then covered that with a dark metal spray paint. I got a bristle brush and lightly scratched on a more chrome-y silver so only the raised parts were hit with the paint.

Next, I made Peter Quill's cool flashlight thing that you see when he is getting the orb in the first scene. I used the sideshow hot toys action figure photos for reference on this. It's just a glass open ended circle I had left over from a led lamp I bought and took apart. Cut up some old tupperware for the nearly-clear tube in the middle. For the top, I have some foam that I glued a small white LED I had leftover to. I have the top attached with velcro so I can easily take it off and turn on the light. 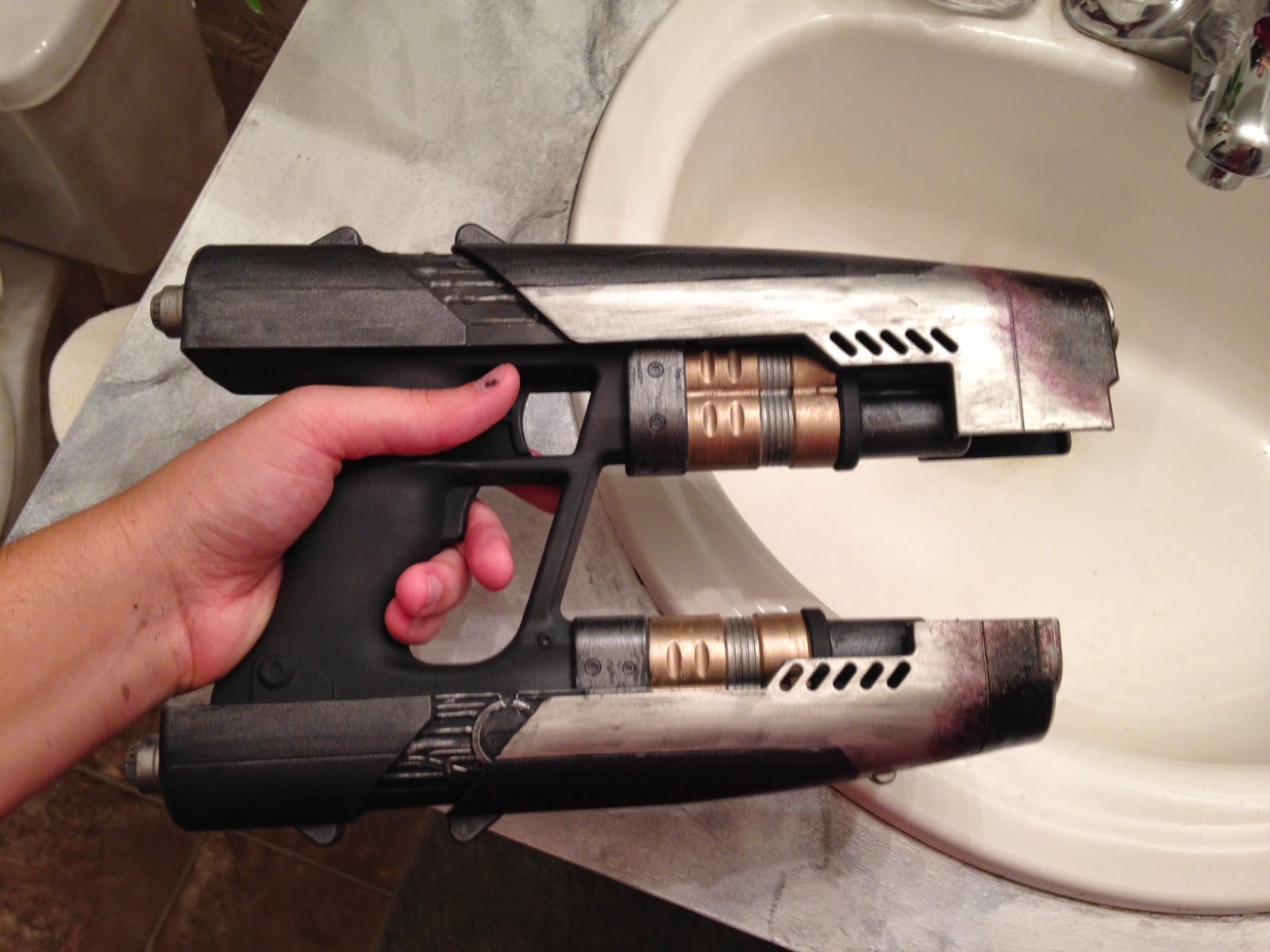 I bought the $20 toy gun from ToysRUs and took it apart. Gave everything a base coat of flat black then hand brushed on the silver, dark metal, and gold colors. The best part was adding what looks like Star Wars "carbon scoring" around the barrel. Saw a prop and it had this basic weathering so I wanted mine to as well. I did give this a good clear coat spray to finish it up, especially on the grip so the paint doesn't come off when I hold it for a while. 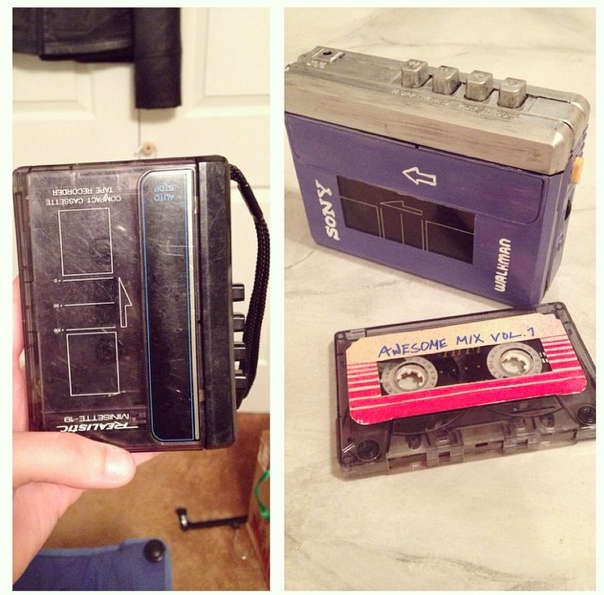 After some research, i found that the #starlord walkman was this silvery blue version from the late 70s. Painted this cassette player i found at the house and made a sticker for an old tape. The hand lettering ended up looking pretty dang cool! One step closer 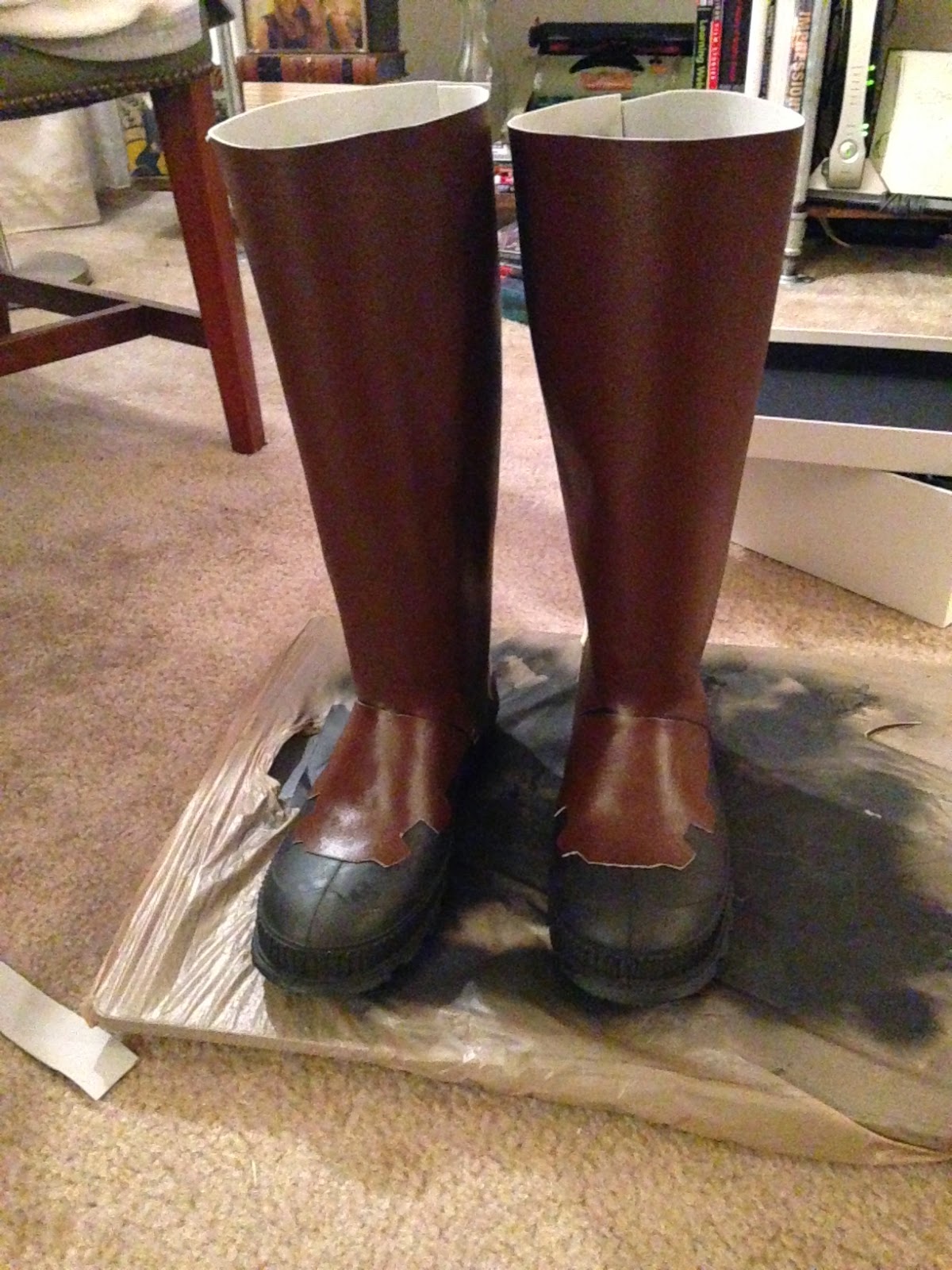 Old rubber boots I never wore in college are the base for the peter quill boots. These will be tricky since the glue I use to hold the vinyl on the rubber takes about a day to dry... slow and steady on these I guess, but at least I can adjust the size to fit correctly over the pants. Weathering will make a HUGE difference when completed. Plus I bought some little nerf guns to paint and attach for the jet-propelled part, which will add a lot tho this. 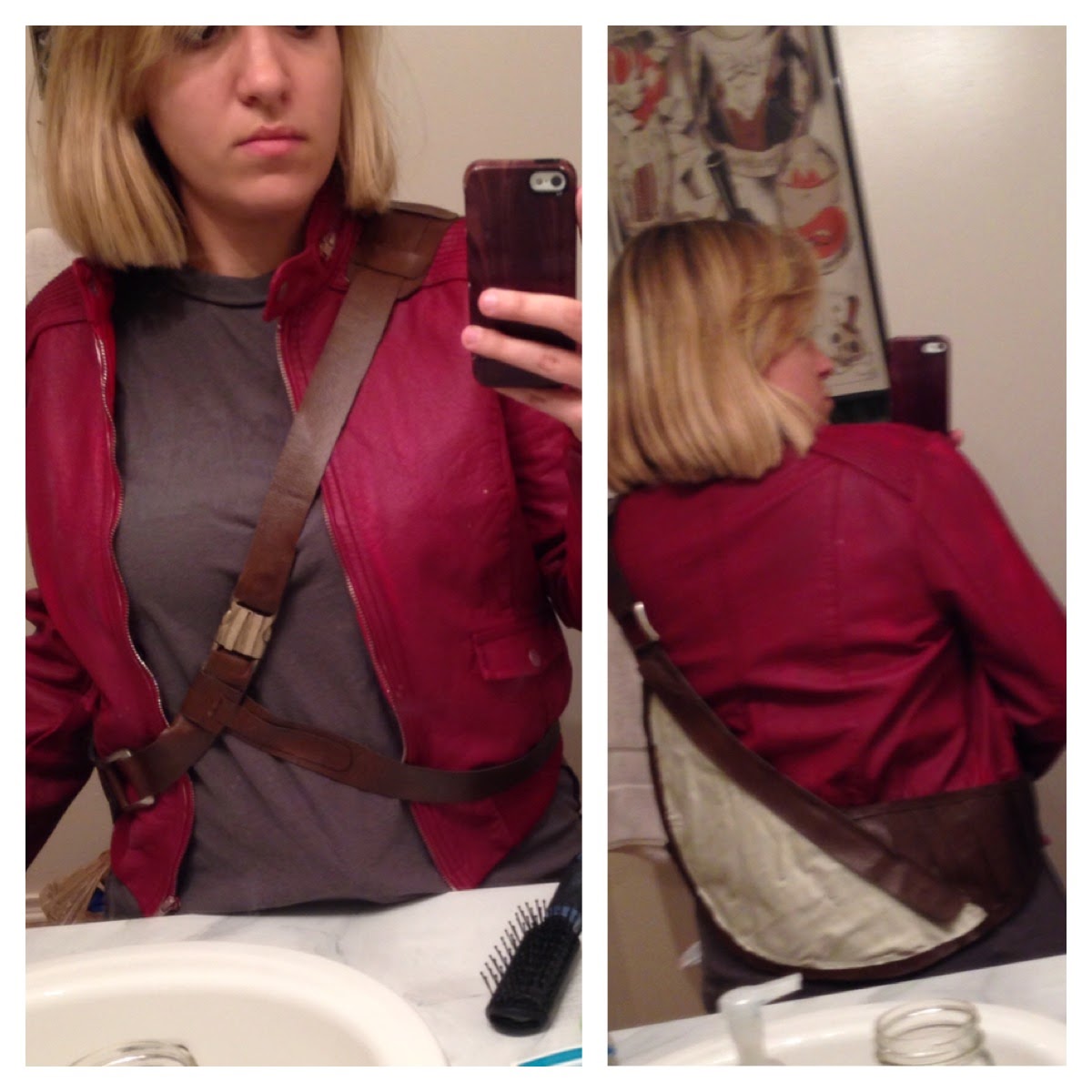 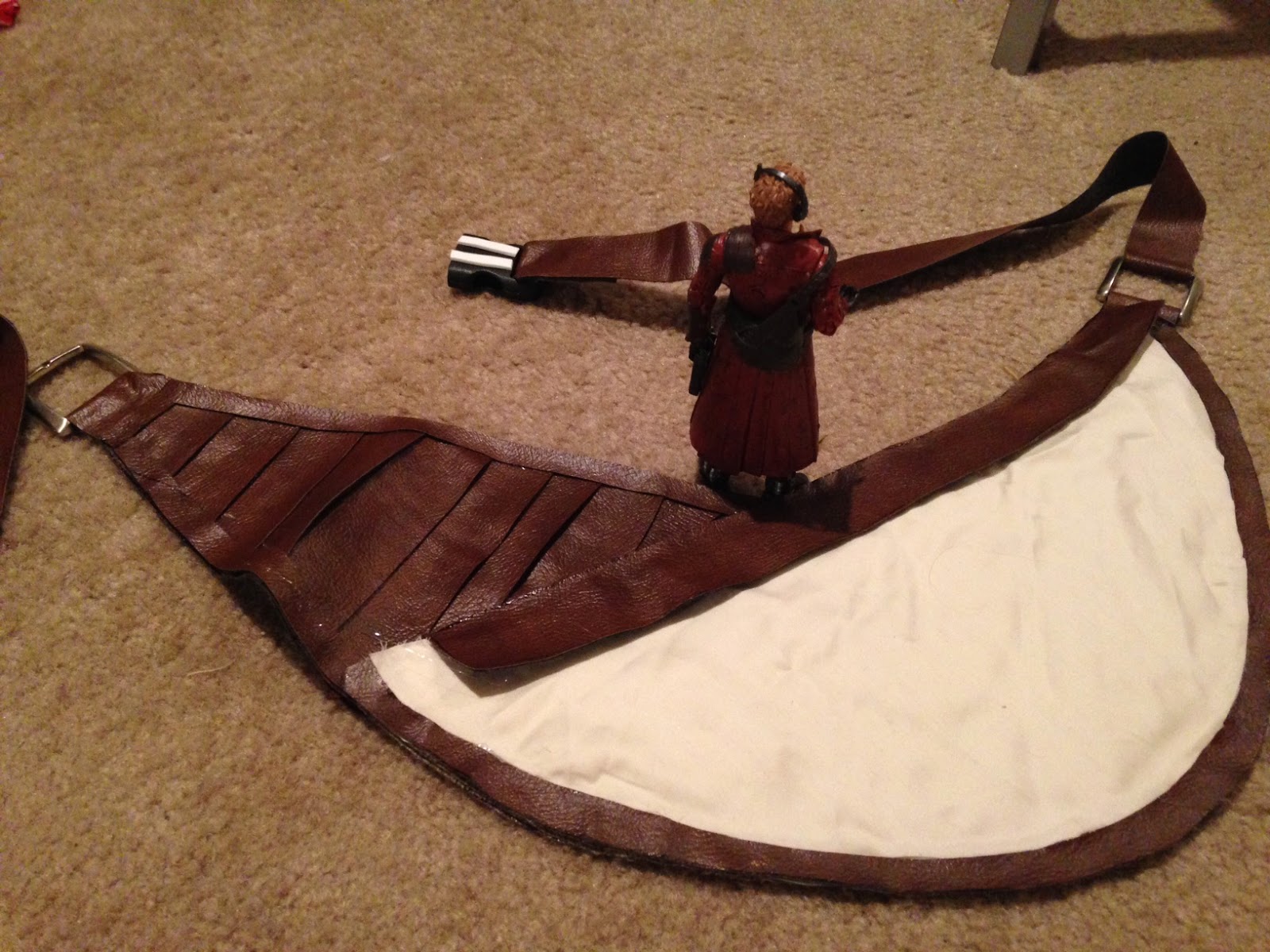 Lastly, the bag is about 85% done after one night of work. Cool thing it, it will actually hold a little bit, so it functions as a "nap sack." I used the marvel legend action figure as a size reference and the sideshow toy for the basic design. It is really hard to find a good photo of the back since you barely see it in the show anyway. Had all this vinyl and fabric left over so only bought the clasps for this. At this point, I just have to add a bunch of hardware and weather it to death.